Last week I flew to New Hampshire to try and wrangle us a rental for our first year. You would think that an area comprised of mostly RENTAL homes would have some options. There are a few options out there. Emphasis on FEW.

The first is a little red house in Meredith. It’s incredibly quaint, but the owner is kind of a nutbar. I can’t decide if she’ll be the type to sneak into the house and sniff the carpet. She went on and on about how she hates cats because they pee all over… I would hate them too if that’s what mine actually did! Anyhoo, It looks like an old schoolhouse, was built in the 1850s, and is one of the original homesteads in Meredith:

Look familiar to anyone who visited us in Winston-Salem?

I also had quite the adventure on my solo trip. I made it a point to make friends with as many people as I could, with intentions of plying every bit of info I could about the area. It worked.

On day one I met Heather, who is a rental agent up in Meredith. What a doll! We went to breakfast, had a great time, then she invited me to join her with another one of her clients to go on his boat for the day. It’s about 50 degrees, with a nice little breeze and constant drizzle. Luckily, the boat had a heated cabin and Kenny was a gentleman. This was important, because the cabin was itsy-bitsy. We entertained ourselves chatting while we crossed part of the lake, parked at the dock, and walked to a restaurant on the shoreline. 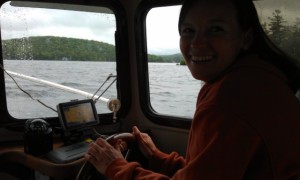 Now, Kenny is a character. Over nachos and beer, he proceeded to whip 3 word questions at Heather with alarming speed. His volume is stuck on 11 as well, so I’m sure it was quite a spectacle:

Kenny: YEAH, I HAVE NO IDEA WHAT THAT MEANS!

This continued until Kenny looked over and noticed a life-sized cardboard cutout of the “Most Interesting Man in the World” dos equis guy. He jumped up, went to the waitress and asked her for it. The crazy thing is that she actually said yes! So Heather and I (and several tables full of diners) are watching in amusement as Kenny is trying to pry the guy loose with a fork. Turns out he was attached too well and Kenny would have to come back another day with a staple remover. Which he fully intended to do. 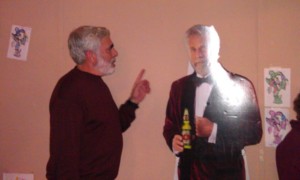 Our ride home was relatively uneventful. We were cold, full, and tired. Kenny deposited us back at Heather’s place and I moseyed back to the hotel. I think both of us needed to imbibe in a little silence.

I also met a wonderful couple out at a nice restaurant. We were all seated at the bar. Me, because I wanted someone to chat with, and they because the bartender happened to be a good friend. This turned into a 3hr party. The food was positively delicious. I had a “side” of mac and cheese, a bowl of clam chowder, and an appetizer of scallops that had been seared in a maple syrup glaze. I know it sounds weird, but believe me, it worked: 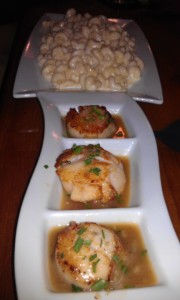 I also did quite a bit of driving- up to the ski resort where they now offer zipline, ski lift, and hardcore segway tours on the trails around the area. They also have a separate ropes course, and something called a Model-T Snowmobile. I don’t know (or need to know) anymore than that I really want to ride in a Model-T Snowmobile.

I checked out a local farm stand and found the most delicious strawberries I’ve had since I lived down the road from a u-pick in NC. 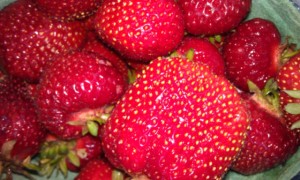 I also headed up I-93 to check out the white mountains. Definitely not the same as the mountains in the SW, but considering we’ll be living right next to them, we’ll cut some slack and enjoy them as often as possible. Plymouth, NH is a tiny little college town along the way, and when y’all come visit, this is one of the required stops. More good restaurants than I could count. I have some dining to do.

At the mouth of the white mountains, I can see many meals eaten here on the way home from a cold, wet hike.

I also managed to go to Dunkin’ Donuts approx 75 times, found the original Devil Dogs snack cakes for FS (and she was right on both counts: there really is no substitution for the original DD Coffee OR Devil Dogs). Side note: Devil dogs are 2 longish flattish devils food cakes with a yummy white cream in the middle. Think Ding Dong but (of course) better. As there is also no replacement for HER, this was fitting.

I wrapped up my trip with a walk to the lake to check out the view and came across some ducklings with mama.