The Drive of Drives

The last few months have been very complicated to schedule. We had a few situations that made me chuckle, gag, say “AWWWW”, and several that I want to share.

My last drive out of AZ was solo because Luke was still in NH and I needed to get to Albuquerque to pick him up from the airport. Here are a few pics that I took. They kind of encompass what I love about the southwest.

Monsoon season is so crazy. I so rarely take pictures while driving, but this was spectacular. Traffic was light, so I slowed down and captured the moment… about 30 seconds before I was plunged into the worst monsoon storm I saw all summer. I love it!

This is a meadow at the top of Schnebly Hill Rd (my all time favorite road). The rewards of driving this 15mile rough (ROUGH) dirt road are totally worth it.

Mountain Meadow at its finest

Luke was retrieved from the airport without incident, and so we headed down to Roswell to finish (start) packing the moving truck and uhaul trailer for the long trip east.

We haven't managed to train our pack of spider monkeys to do this kind of thing for us.

You jealous? I know you are.

My last 45min in Roswell, NM were spent at the DMV. Rock on.

The drive from Roswell to Frank and Sandy’s house was pretty uneventful. 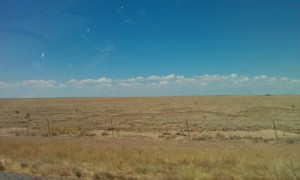 We're taking New Hamphire over THIS little slice o heaven?! (I'm kidding, because I actually LOVE the desert. You have to admit, the difference is stark)

We took two short days to try and get the cats used to the drive. It didn’t work. Apple complained for a good portion of the trip, but who could blame her? The poor girl was about to starve, going without food for 4-5 hours at a time. 😉

The Texas Stafford’s house was fantastic- we had several days to relax and spend time with the various friends and family in town, eat yummy Mexican food (probably 2 meals a day were Mexican- trying to get my fill!), and recharge before the drive. Here is a real impressive meal that WASN’T doused in chile.

I managed to get a pic of my head-sized pork shank from Friday's dinner, but none of all the family we saw... That's how I roll.

Here’s a view from the back patio… what a rough life, eh?

We also made it down to Aunt Marla’s house in Pleasanton, TX. She totally made my week by waiting to bottlefeed Stormy the calf til I got there. I had no idea, but calves literally NEVER bite. And the suck reflex is super intense… as you can see by the pictures. It was a very strange feeling to have your whole hand sucked on by a cow.

Comforting Stormy the calf. This little guy is adorable!

At this point it had been something like 1 bazillion days with no rain and record heat, and the first drive out of town was no different. It was 112 degrees on the highway out of Dallas when we realized we had about 50miles til empty on the gas tank and about 40miles to go to the nearest gas station. While pulling a trailer and hauling 4 animals. Oops. We obviously made it, but man. That would have sucked.

We managed a detour to Luke’s first college town- Georgetown, TX. Home of Southwestern University and Luke’s first (and only) frat house.

The cats were their own kind of challenge. In the hotel, Darwin hid in the nasty crack between the bed and the wall and only came out when coaxed. He would then immediately jump on my lap in the bed and drag up all sorts of yuck from the hotel netherworld. Apple complained off and on for the whole trip.

(facebook) 91 degrees, approximately 90% humidity. Apple the bear-cat won’t stop complaining. Solution: climb in the back cargo area with the litter box and trap her inside for about 5minutes. Backfire: she drops an enormous dookie and takes her time covering it up. Did I mention it’s hot? D-:

They both managed to break out of the kennel on multiple occasions, and put up a fair fight on the way back in. They spent nights crashing around the hotel rooms, plotting our demise, practicing ju-jitzu and the dark arts in an attempt to learn how to mind-bend the kennel door to their will.

If they only had thumbs to work that little zipper…

Would you be able to fall asleep with this??

(facebook) Nearing Niagara falls. Thinking about sending Black Tiger and the Apple Smuggler on an adventure. Need a bigger barrel.

(facebook) Took too long trying to pronounce Schenectady, and ended up just having to stay the night. If we don’t have it figured out by tomorrow, we’re still leaving. 😉

Schenectady was our last stopping point, and was relatively uneventful. We walked to dinner, and it would have been a real shame to get run over so close to our destination.

Not exactly pedestrian-friendly in Schenectady, NY

As a bonus for being so patient and reading this WHOLE post (it’s ok if you needed to take breaks), here’s a pic that lives at Marla’s house. How cute is that?!

Picture of Luke as a wee lil one

3 responses to “The Drive of Drives”